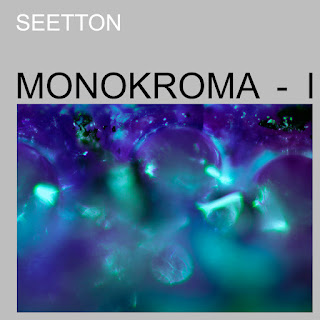 MONOKROMA, Yes, it's the variation of an overused title: Monochrome. Ok.
But it's because the sound is really in the same idea of a large surface of the same color, with only subtle variations.

This long piece has two origines:
- Firstly, I wanted to try the possibility of some digital tools (see later). And also to try some compositional technics only by mixing. (Nothing new here, See the world of electroacoustic/acousmatic or tape music technics, or all others experimental currents)
- Secondly, because I have always been impressed by the work of Elian RADIGUE, I wanted to confront the same universe. And is it possible to create living sounds with digital tools , often (wrongly) considered cold and too perfect, instead of Analog synth considered warm and lively ?

Here is the result, a piece of sounds that change very progressively and (I hope) as subtile as possible. Composition was a deep journey into the sound and time.

SEETTON is a project devoted to the relationship between sound and image. Luckly, more or less at the same time, I was doing some macro-photography, and short film with the same setup, of enamels objects. Very strange images, that looks more like images of space supernova, galaxy or so one. That's not precise in my head, which medium was inspired the others, but during composition, It was absolutely obvious to combine sound and these images.
A film ? No, the idea is more an installation. You enter into a room, see an image, head a sound, you can stay, long or short time. No starting point or end. A continuous flux of sound or images.

But, here, start the unluck: COVIDE-19. Small opportunity to show this release was cancelled. Definitivelly.
So here is it, available for all on Bandcamp. Maybe one day I was adding the film somewhere. Cover image is from the film. It takes an idea...

Technical note:
All sounds are generated with MAX-MSP. With the tools of IRCAM : MODALYS and SUPER VP.
Mixing is done in REAPER with only filtering and a small touch of "mastering" with OZONE plugins.
No reverbs or others FX added.